I moved to the UK about 11 months ago, so when my cousin Lauren and her husband Kane decided they were going to come and visit me I was pretty excited. Technically they were coming to ‘tour the UK’ but really, it was mainly to visit me (I have my delusions ok). I had not had much of a chance to explore the UK despite living there (Europe is too much of a temptation for me!) and hadn’t seen these two crazy kids in way too long. So it was during one of our pre-trip, vague planning sessions that Lauren casually dropped the old “you’re welcome to come road trip around England with us…but we’re going fossicking … just so you know” line. I have known Lauren my entire life so was not at all surprised. Having sat through countless lectures (I mean *cough cough*, INTERESTING discussions) about rocks/gems/fossils/etc. as children, and somewhat reluctantly participating in early fossicking adventures (seashells and quartz lol), I was dubious that this was an appropriate holiday activity.

Still, being somewhat of a science nerd myself (although skewed more towards biology and health science) and up for any new adventure, I agreed to indulge the Maxwell’s with enthusiasm and vigour. Truthfully, fossicking is something I had always been curious about but had had neither the time nor the geological knowledge to try. To be honest, my priority is travelling EVERYWHERE at the moment, and it is hard to get excited about rocks when the blue waters of the Mediterranean beckon. Still, I figured what the hell! At the worst I’d be admiring pretty scenery while the two “rock doctors” (as affectionately nicknamed by our family) admired mud and dirt. I also kind of secretly wanted to be Indiana Jones growing up (Lauren: Who didn’t?) and find lost treasure, so I figured this would be a great way to test my natural talent. 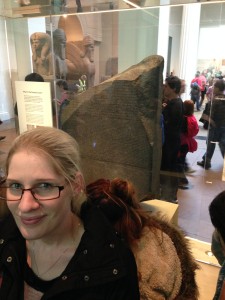 We started my geo-education with a visit to the Natural History Museum in London (though it continued through to various other institutions across London). I’d been before of course because, well it’s awesome, but it’s a whole new experience to visit the geological section with two geologists making comments like, “actually that’s grossly oversimplified” and “why is the most interesting fossil hidden in the dark?!”. Seriously though, why is it? They were referring of course to the Archaeopteryx, aka the famous ‘proto-bird’ fossil and evolutionary missing link between dinosaurs and birds, which we nearly missed due to its location shoved up the back of a dark room. I was offended once I actually knew it was there (Lauren: I was also offended by the layer of dust on all of their prize diamonds, however their spectacular prehistoric marine reptiles display made up for it.). 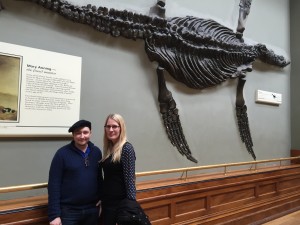 I did actually learn a fair bit by going with these guys, including that there’s a Jurassic Coast in England (who knew?) and that you can find ACTUAL DINOSAURS THERE (Lauren: Here we go..). And of course that’s where my obsession with finding a dinosaur came about. Lauren and Kane insisted I would probably not find an actual dinosaur (Lauren: We did not say there were dinosaurs), but perhaps would find something like an ammonite (Jurassic squid thingy) or an Ichthyosaur (Lauren: which is a prehistoric marine reptile, not a dinosaur– and we said you might find a vertebra or tooth if you were lucky) which are apparently common in the area we were headed too. I, of course, said I would prove them wrong and find a dinosaur.

So we headed to Charmouth in southern England and commenced a leisurely stroll along the beach, me looking around aimlessly until I was shown the best places to start looking by Lauren (cue geological lecture, ahem, I mean *discussion*..). And so we looked, and we looked, and after many unsuccessful (and probably annoying) “did I find something’s?”…I actually did find something! (beginners luck?) and we came across a little stash of ammonite fossil imprints (Lauren: Note here that the two HIGHLY trained geologists were late to the ‘finding fossils’ party). We managed to find a few decent pieces (including some belemnite fragments) and I now have a real life Jurassic era fossil sitting on my desk back in London. Although I am quite disappointed I didn’t find an actual dinosaur (next time) it is pretty cool to know that the piece of “rock” sitting on my desk is millions of years old, and that the imprint is from an actual animal from that time. 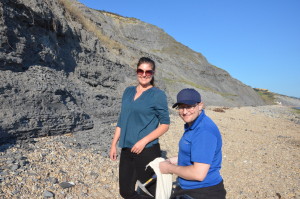 From Charmouth we travelled north through England and actually looked at things other than rocks! But when we made it to Scotland…yep you guessed it…more rocks! This time in the Pentland Hills just south of Edinburgh. I went along this time for the hell of it and because of the beautiful scenery. I was not exactly well prepared in my converse shoes and jeans, this walk a little different from our leisurely stroll down Charmouth beach. I had not realised we would be hiking when I left London (thanks guys!) and really wasn’t prepared at all. We trudged through fields and past cows and eventually got to the ‘burn’ (that’s ‘creek’ in Aussie) in question. Surveying the breathtaking lake and scenery, it became more and more apparent that I was not dressed for this adventure (muddy streams and long grass come at me!). So after a look around the pretty hill and almost colliding with an insane man running up remote hills in short shorts (honestly who does that anyway?!), I decided to head back to base camp (aka the cute old pub in the town nearby that does nice coffee). I’m guessing somewhere along the line I was viciously attacked by some sort of ninja insect, as I had a fantastic allergic reaction to the bites all over my face/neck/arms a few days later. Lauren and Kane sadly returned unsuccessful from the hunt, mumbling something about fossil hoards further up the U-shaped valley. I actually can’t remember what we were even looking for there- I think I had reached my tolerance by then (Lauren: Trilobites…stupid bloody grass everywhere!). 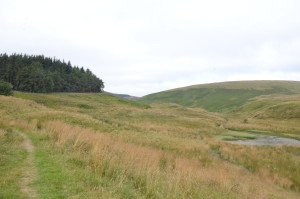 Uhh, so about those trilobites…Pentland Hills

So to sum up my fossicking foray and the things I’ve learned: 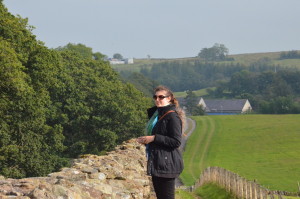 Admiring Hadrian’s Wall and the English countryside- “Now this is livin’ Barry!”