Charmouth is a picturesque town where holiday-makers frolic in icy seas and picnic on gravelly beaches. Charming, pretty and unsuspecting. A place to bring the family for a long weekend, or the girlfriend for a seaside retreat. People come to escape their cares and the miserable weather that is London.

Little do they know the dark secret [Kane: It’s not a secret, everyone knows about it] that lurks within the cliffs of Charmouth. Buried (literally) in the sands [silts] of time, hidden from view and ready to appear at any moment… a creature so bizarre, so terrifying [You’re ruining our credibility you know], that it would chill plankton to the very bones (if they had any)… 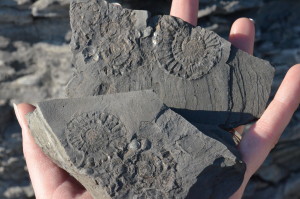 Pretty scary huh? Ok so it’s basically a squid in a shell, but I had never found one before so I’m entitled to some dramatic licence.

Charmouth is on the south coast of England (aka the Jurassic Coast), about a 3 hour drive from Heathrow. DO NOT, I repeat, DO NOT pick up a hire car at Heathrow- Europcar kept us waiting about 3.5 hours. Torture. Anyway, the drive down is mostly highway (can take the A303 past Stone Henge if you want) until you get into narrow country roads closer to the coast. Apparently the whole southern coast-Dorset area is riddled with fossils but we only had a few hours to have a look around.

Originally we were headed straight for Lyme Regis, known for its ichthyosaur finds, however read that there was easier access along the beach from Charmouth. In hindsight I would have gone to Lyme Regis as we didn’t have enough time to walk far enough west towards Lyme Regis to get into the really good areas. For Lyme Regis the tide can be an issue though so time your trip based on that. If you are worried about time constraints and getting the most out of your trip, local fossil enthusiast Roy Shepard runs tours. So after a delightful picnic we started walking west from Charmouth along the beach. Make sure you take plenty of water, sunscreen and sample bags with you so you don’t have to walk back. As you can see we had perfect weather, however in the event you are not as lucky make sure you have ponchos and waterproof boots. 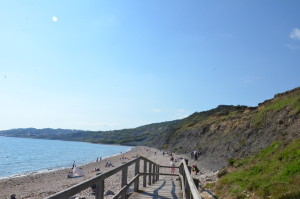 We didn’t initially see many fossils so resist the urge to start as soon as you hit the beach. It was actually first-time fossicker Brittany (my London-based cousin who graciously accompanied us around the country) who found the first ammonites a few hundred metres up, so walk a bit if you can (or start at Lyme Regis instead).

We tried a few different strategies. There are loose shales along the cliffs where you will find ammonites like those in the picture above. Please refrain from hammering the cliffs and try splitting the existing loose material instead (and keep an eye out for potential rock falls- safety first!). I’m lead to believe there are ammonite nodules further west of our location but we didn’t see any :(.

We also found belemnites, some ammonites and a piece of potchy-looking material in the gravel beneath the cliffs (there are weird bug/shrimps things that fly out at you when you dig here so be prepared for that!). As you continue further down from the cliffs towards the water the belemnites become more abundant in the gravel. You need only scratch the surface and spread the gravel around here rather than actually ‘dig’. 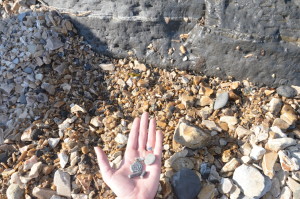 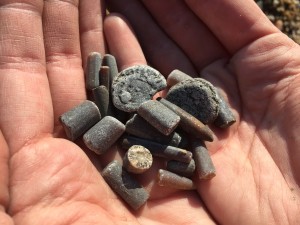 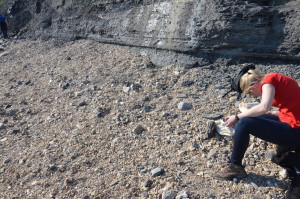 L to R: Gravel at the base of cliff where fossils were found, belemnites and ammonites in the gravel, moving laterally towards the water looking for belemnites.

Ideally I would have liked to have spent a few days or weeks in this area to gain some local knowledge and see a few more places. I feel like we really missed out on exploring the area properly because we were on such a tight schedule. It was still a fun couple of hours and the Jurassic coast is a beautiful part of England. Luckily we visited during September so had plenty of hours of light to explore and drive around. I think the days are much shorter (and obviously colder) in winter so make sure you don’t get caught out.

A Note on Preservation!

Some websites recommend soaking fossils from this area in fresh water for a few days to draw the salt out, but they do not make the distinction between different types of fossils!

This is a good idea for hard, silicified or calcified material such as the belemnites we found, but do not do this for your shales! These rocks are very delicate with high slaking properties and will literally fall apart if you do this. Your fossil will be destroyed.

Keep in mind too that a lot of rocks from this area are highly pyritic (have fools gold in them) which oxidises upon contact with air and moisture. If the pyrite is disseminated throughout the matrix (i.e. pyrite is in the actual rock rather than just coating fossils) this process with cause the rock to slowly break down and crumble, destroying your fossils. To slow this process keep your fossils in a sealed container away from excess humidity (a good idea for most rocks really!). That being said, Kane and I are very much novices when it comes to the preparation and preservation of fossils so if you disagree or have further advice please leave a comment below! Happy hunting! 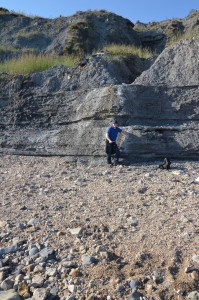 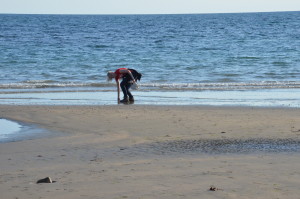 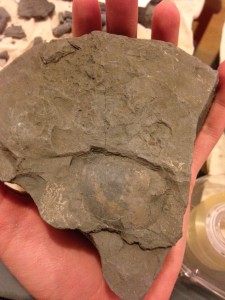 L to R: Kane demonstrating the lateral traverse of our fossil locations; shale cliffs, gravel at cliff base & gravelly beach. Continuing a Maxwell travel tradition- touching every new ocean we come across! Uncovering a suspected brachiopod in the early stages of preparation back home.