You may have noticed by now that we like to travel. One of our favourite trips was back in 2011, during which we visited an amethyst mine in Finnish Lapland.

The mine was about a 2 hour bus ride from the town of Rovaniemi, where we were staying. Rovaniemi itself is a fantastic place, but as this is a fossicking blog and not a travel blog you will have to investigate it yourself! The bus ride was surprisingly comfortable. If you’ve ever been unfortunate enough to take a long-distance bus ride in Australia you will appreciate this fact.

The mine itself was shrouded in mist and cold when we arrived, though luckily there was no snow on the ground. Kane protests this (3°C is not cold!), however he is obviously insane.

Anyway, it was a bit eerie with the mist floating around and surrounded on all sides by forest. I was preparing my troll attack defensive manoeuvres as we made our way up the mountain. The mine is a bit of a hike, both from the bus drop off point and heading up the hill from the office where you purchase tickets, so a moderate level of fitness is recommended. 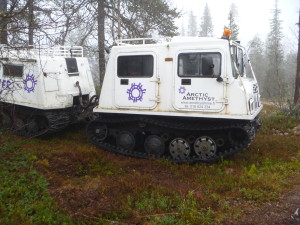 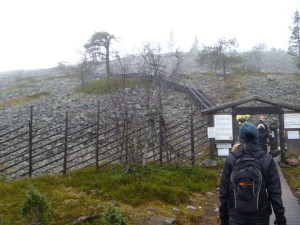 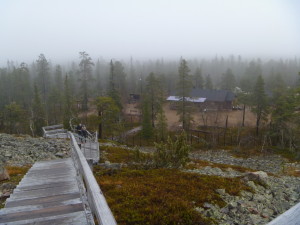 It’s also very cabin-in-the-woodsy, with timber buildings and fencing all around. The rocks have obviously been well-worked, but it’s the experience rather than the find itself that draws visitors. You walk along wooden paths to a hut where you learn a little about the geology of the area and have the opportunity to handle prime specimens. After this you are lead through the “mine”, which I suspect is really just a wooden tunnel built for effect and atmosphere. Still cool though. You come out somewhere downhill in an area of loose, gravelly/clayey material.

This is the fossicking area. Picks and water are available for your use and the guide is on hand if you have questions or need advice (dig until you find purple stuff!). I was so excited I fell to the ground in a frenzy, clawing at rocks with the kind of single-minded intensity normally reserved for the criminally-insane. Needless to say Kane was very amused by the fact that dirt and dew were seeping into my jeans while he methodically and daintily picked at the gravel. Needless to say I was an ice-cube by the end of the designated half hour, but it was worth it! I had my amethyst- huzzah! 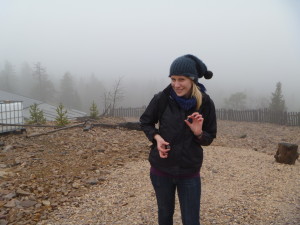 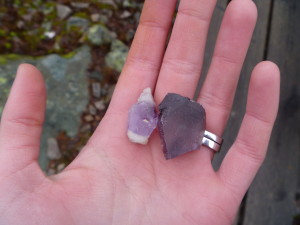 As you can see I found two lovely samples (note the fossicking area behind me- ignore the smurf beanie). While we visited there was a stipulation of one ‘lucky’ specimen per person, however with a little sweet-talking and couple of Euros I got to keep both of mine :). Probably overpaid lol :(.

Irrespective of that, on your return from the FREEZING death pit of fossicking hell, you are thankfully rewarded with a blazing fire and a cup of hot berry juice. This will be the most delicious thing you have ever tasted. When I asked the guy what recipe he used he looked at me like I was a lunatic and replied “it’s berry juice”, which I assume means check the juice aisle of the local grocery store. Duh. To be fair, it wasn’t that cold. I’m just a lizard- give me deserts and thunderstorms any day! The place has a wonderful atmosphere and would be especially good for those with kids or just starting out.

Finland is amazing. The people are very welcoming and relaxed, and they all speak English as far as we could tell. If you are looking to bring home the ‘motherlode’ then this experience probably isn’t for you, but if you want to explore Lapland a bit and have some fun, this is well worth the bus ride. Be aware that the tour isn’t very long and there is not a lot else to do in the nearby town Luosto unless there is snow on the ground. I’d suggest either organising a few other activities in advance or driving yourself (rather than taking the bus). We went for a walk around a lake and had a few drinks at a nearby hotel, which was a pleasant way to defrost and pass the time. 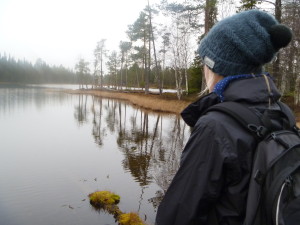 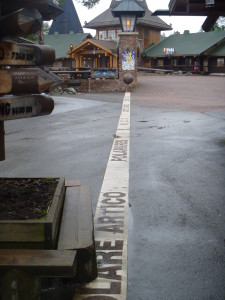 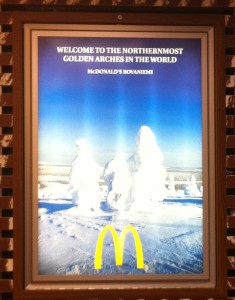 Left to right: Admiring a lake in Luosto, The Arctic Circle at Santa’s Village outside of Rovaniemi, Another Rovaniemi drawcard- the world’s most northern McDonalds!